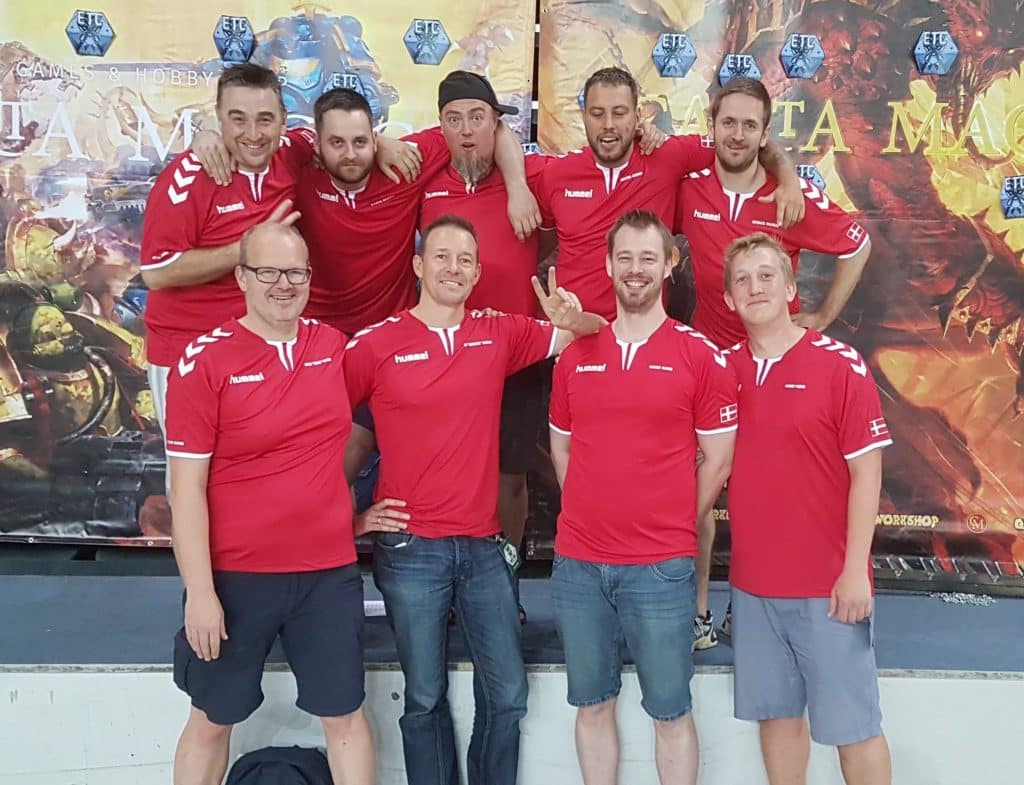 Team Denmark’s Silver at the ETC

Hi there, my name is Lauge Perto and I’m the coach for the Danish national 40K team. When Glasshammer approached me and asked for an article about this year’s ETC I jumped to the task with much fervour and a little bit of trepidation. I read both the American reports after the ETC and Neil Powell’s great article here on Glasshammer and they are tough to follow. Considering that, I have decided to write an article more about the team of great players and why we brought the lists that we brought, rather than giving an extensive battle report of all our 6 games. Hope you’ll find it interesting and useful in either list construction or in your deep thoughts about competitive 40K. 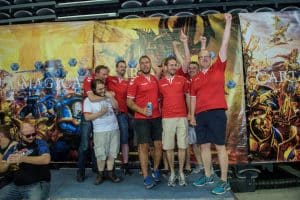 The first Danish ETC team was founded in 2008. For the first couple of years the process of deciding next year’s team changed almost yearly until finally settling in 2012 on a “five-man team tournament winner takes it all” format. While very all-in, this format has led to a lot of consistency on the team as the same core of very talented players have won the qualifier last three years, and that has led to a remarkable transferal of knowledge and skill from one ETC to the next.

Besides consistency it has also lead to a growth of the ETC scene in Denmark. Where the first qualifiers were small affairs, this year’s version is looking to be 16 teams, 80-man tournament. And while Brits, Americans and Russians probably smile at such small and cute numbers, for a country the size of Denmark those are some very respectable numbers 😉

The team this year was comprised of the following players (CLICK ARMY NAME TO SEE ARMY LIST):

The team this year had only previous ETC veterans on the team – and 6 of them from last year. Knowing how games at the ETC are played is something that makes a difference between the players who are good locally and the players who are good internationally. Not to imply that the games at the ETC are bad, sour or anything like that. I think the ETC is one of the friendliest competitions around and we always have a great time with our opponents – would highly recommend the ESC for anyone and the ETC for anyone who can qualify for it! 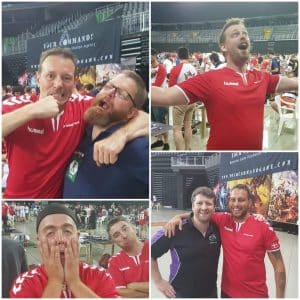 Our overall list designing strategy have been the same for both years that 8th have been out. We want well rounded lists that doesn’t rely on a single trick to perform. They should have a game against most other meta-lists and enable our players to perform at the table. That is one of the reasons we dropped the Tau list this year. While powerful, it is extremely singular and works in only one phase of the turn, so in the end we decided against bringing them.

But there is always an exception. Some lists, even if they are completely singular in their focus, are just so powerful that we can’t ignore them. Stormravens, Flyrants and Dark Talons where three good examples of such lists. While they go against our general doctrine, their sheer power was so staggering that we couldn’t ignore them. And that is how we felt again when we read the new Imperial Knight codex. The deadline for list submission was close when they released, and we scrambled for lists that countered the knights. The more we tested and the less counters we found, the more we decided to break our guiding principle and bring them as singular armies instead of reinforcing some Imperial or Chaos lists. But even in our knight lists we tried to add some elements of generalists, and that is why both lists include several Armiger Warglaives – a truly generalist unit that allows a good player to show off some of his skills, even though the army is very specialized. 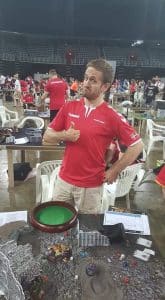 Instead of going the Scottish way and taking all Coven units or going the English way and taking 17 harlequin bikes, he took some elements of both and combined them. This combination of tough board prescence, hard hitting and stratagem fuelled bikes as well as some ranged support in ravager ensured that he had “a game” against almost every list he faced.

Another example of the idea of rounded lists can be seen in Martins Custodes list!

While the list is somewhat singular, we tried to add some different, supporting elements to the core of the custodes list. The list was designed as a strong answer to hordes, and it played that role to perfection. But when we see the lists that he actually played against, it was very few horde lists. Both against Scotland’s Tau and Romania Imperial Knights it was all the supporting elements that secured Martin some (a lot actually) points in otherwise horrible matchups.

The last highlight list is one that came into existence precisely because of our idea of broad lists. At first, we were looking at Cultists with Thousand Sons characters and Plaguebearers-galore like so many nations. But we felt that, while strong on the table, the Plaguebearer lists needed too much nursing in the matchup process and therefore we went with Machaels Chaos Daemons, Thousand Sons list.

In this list Michael truly has a treasure trove of possibilities. The summoning points alone allows him to effectively sideboard after seeing the opponent and the mission, but the synergy between the Thousand Sons characters and the Plaguebearers durability gave him the possibility to decide the games on his terms instead of just reacting and being on the defense. 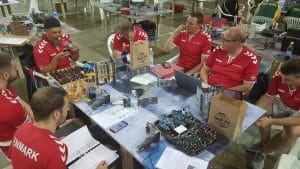 Our overall match-up strategy goes hand in hand with our list strategy. We try to define the current meta lists as accurately as possible and then we want at least a couple of counters for those lists. At the same time, we try to minimise the number of bad match-ups every single list has amongst the meta lists. All this data is inputted into a spreadsheet and then Thomas works his magic.

The importance of Thomas during the pairing process cannot be overstated. He sees pathways towards good match-ups that no-one else sees, especially not our opponents. In almost every round of this year’s ETC when we met up in the huddle after pairings, and before the games started, we had a winning round on paper, based on our assessments. A large part of the success in pairings hinges on two things: the players assessments of their match-ups and the broad lists we have on the team.

The first one is obvious. If the values Thomas is basing his pairings on are wrong, then we have no idea what will happen when the games start, and the pairing process losses a lot of its value. Because of that we whip the players for data throughout the year and always have a half hour of adjustments before every round at the ETC, with the mission and specific lists in mind. This is also why we lost to Spain – in that round we had one match-up labelled as very good for us, but after playing them with their specific list we can see now that it should in fact have had the opposite label! A very fair win for them, we lost because of our lack of knowledge.

The broad lists help the pairings as well in giving stability in the last 4 pairings. The broad lists also often help me out as a coach, because the players are actually in positions where they can either play defensively and get some points or they can make a big gamble and either get 15 or 0 points – a tactical tool we often employ.

Thomas’ matchmaking strategy and the broad list design is also evident in how we made our points. 7 of the 8 players on the team scored between 75 and 90 points! Truly a team effort! Instead of a couple of players bringing in the big points and some players struggling in bad match-ups, we had everyone playing in games where they have a chance from the start. 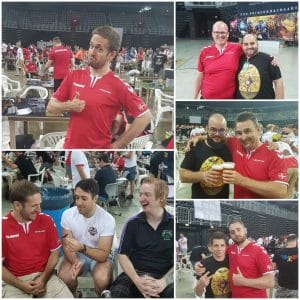 I won’t bore those of you who made it this far with details of our games, but a quick blow-by-blow of the action and how we expected each round to go after the draw:

Some highlights from the rounds include:

• This is the first time Denmark beats Germany, even though we have faced each other in many of the previous years
• It is also the first time we beat our national rivals from Sweden
• Last year we lost to Russia, but drew against Spain, this year it was flipped
• Apparently, our fathers sell Avon?
• If a Romanian offers you alcohol from a weird bottle you should drink it after the round!

That granted us a total of 9 points (8 for 4 wins, 1 for a draw and 0 for a loss) and 581 battle points, enough to place us second overall. That is the best Danish result ever, and on top of that we were nominated for best painted and we won “Most Sporting”. Last year we finished 8th and won “Most Sporting” and we couldn’t believe it – winning it two years in a row is almost something we take more pride in than placing second and combining the two is just a mind-boggling experience. We want to give a big thank you to all the teams who voted for us – we had the hardest time voting ourselves because all our opponents gave us great rounds and great experiences! 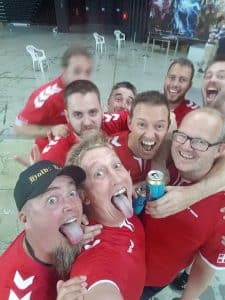 The Danish team is already in sharp preparations for next year. Both with our qualifier coming up in November where the usual winners will try and win it or a new and obviously stronger generation will take over. Behind the scenes there are talks of ways to improve not only they players, the lists, and the team but also how to further expose our hobby and our national team to players in Denmark.

Besides that, a lot of us are going to Glasshammer Open and we hope to see you all there – both on the tables and out for a pint after day one 😀

Thanks for the great post Lauge, and we at Glasshammer are looking forwards to seeing the Danes this year at the Glasshammer Open. If you guys havn’t got a ticket yet, be sure to get one HERE before they run out! 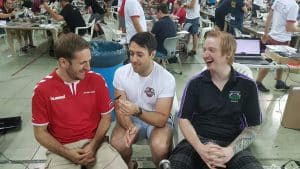 Finally, for those interested in watching Michael from the Danish Team play against Scotland Mathew Edmunds, visit our Twitch Video of the game HERE.