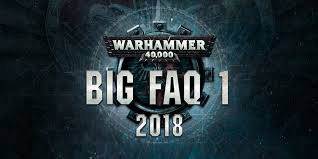 So, now the FAQ has been released for a few months, what has changed? Well notably, very little. We have seen numerous different events be won by, well, basically the same armies. Our recent Glasshammer Open was won by Ynaari/Drukhari mix, a pretty standard combo we see in the UK. In America, a recent event was one by Brandon Grant’s Imperial Soup, a slight variation to the usual we see, but still retains the main pertinent choices such as the Guard Brigade and a Castellant knight.

Why is this? Well as we were all expecting points changes as well as the FAQ changes, lists didn’t change like they were supposed to. This is expecting to change with the upcoming Chapter Approved in December, so until then, what can we expect from the meta? 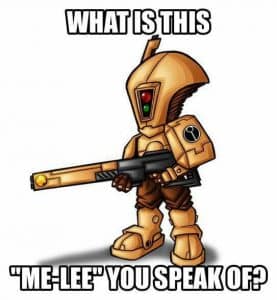 With the changes to fly, we would expect more Gunlines as those pesky Fly units can no longer simply jump over the bubble-wrap and tie up the backfield fire-support.  Tau do this very well, as does Guard. Combos like Riptides with Shield Drones surrounded by Fire Warriors and Kroot will be very strong and will be expected to do very well thanks to the changes to Fly.

Guard tanks, such as Baneblade variants, Tank Commanders and even things like Hydras will see play now. The ability to stop intercepting mobile units flying onto your gunline now is a thing of beauty! What we can expect to see in the future is more tanks, now that’s got me excited!

Deep striking units have become a beta striking unit. Whereas before you could drop your units on even your side of the board and shoot (ravagers dropping down to avoid being shot), now expect to build a list around striking later in the game.  Units such as deep striking Death Company can be a great choice for such a task, after clearing the screens, allowing your heavy hitters to hit later.  This is a blessing in disguise, soo many people decide to commit their forces too early, remember that sometimes its good to hold your units back a turn later allowing you to make full advantage of them. Now although it has hit units which liked to come down turn one, there needs to be some balance in hiding in the shadows and not being shot. Personally I feel this is completely reasonable and was far too strong beforehand.

Utilise your mortars and Hellhounds to clear screens ready to re-deploy your Smash captains. This no longer needs to happen turn 1 as you can have numerous attempts to hit the prime targets throughout the game whilst keeping pressure on your opponent’s manoeuvring around the table whilst knowing you can drop those smash captains anywhere.

Da-Jump – Another ability to re-deploy which doesn’t need to be used rash turn one, clear what you need to first with Lootas and Shoota boys before committing! Don’t always use this turn 1 if you don’t need to. This doesn’t mean it isn’t useful for added pressure but remember what you need to achieve when committing too early. Multiple threats in 1 go is what works best which may mean committing turn 2. 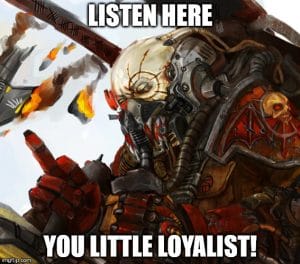 Now that the Ork codex is out, we will see even more hordes. Hordes haven’t changed with the ability to secure multiple objectives. Going first in ITC or ETC missions still gives a tactical advantage to hordes as they can secure the board control early. Horde armies like Guard, Cultists, Orks and Nids can move exceptionally fast, so expect to build ways on either slowing them down (Fliers can do this by blocking their movement), killing them (remember most hordes are fearless) or getting rid of their buff characters (not always possible). These types of armies can score big early, but always remember that this is to be expected, don’t get disheartened and play for end game!

Now that we see a decline in Dark Reapers and the return of Hordes, bring your Storm Ravens, Dark Talons, Dakka Jets and Crimson Hunters out to play! Flyers are still -1 to hit, and most of them are exceptionally durable. Now you can give them +1 save if going second, they are extremely reliable when you need them to perform. Deploying them right at the back, making only certain units capable of hitting them from such range AND giving them a boost to their save makes them very hard to budge!

Flyers can still impact the game in multiple ways, with their multitude of weapons and the ability to slow down troops on foot which we see more often with the fly nerfs effecting some armies and making people change their lists!

These are some of the notable changes expected to be seen, what other changes have you guys noticed in your local/national meta?