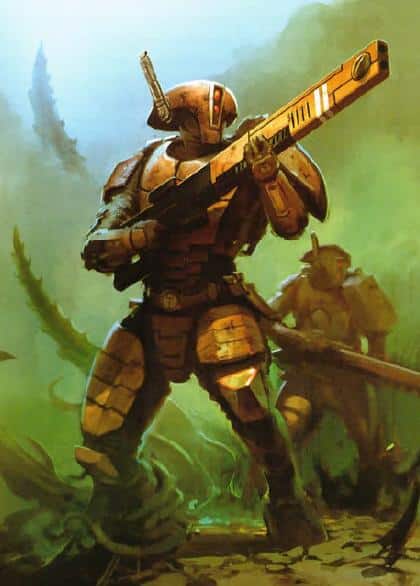 Hi Guys, I’m back and ready to hit you up with another dose of Chapter Approved madness. As you all know I’m on the slopes in France this week and haven’t had any 40k stuff with me. This has given me a huge amount of time to concentrate and reflect on what I will be doing post Chapter Approved.

This will be a good one for all you T’au lovers out there as my main thoughts have been about the funky little fish men and how I’m going to be fielding them myself.

So here are my main thoughts…..

Shadowsun – So for the kind of list I want to run, massively shooty and not too mobile, Shadowsun is the no brainer general to go for. She is down to just over 100 points which is a huge reduction and incredibly cheap for a character which is giving effectively your entire army full re-rolls to hit for 2 turns of the game. There won’t be much left of your opponents army after you have called 2 Kauyons, trust me.

Crisis Suits – Now there are multiple ways of running the crisis bomb which in my opinion are pretty damn powerful. The 2 versions I am going to try over the next few weeks are either 8 suits with 3 missile pods each and 10 shield drones for long range immense fire power and 9 suits with 3 burst cannons each and 18 gun drones for over 150 short range strength 5 shots which will tear through hordes and tanks alike. One thing which is leaning me towards the second option is the fact that it’s different from what most other players like to run and I love running things out of the ordinary. I am a little worried I have to be in 18” range to cause my damage but then they will shoot a massive hole in the target unit or units and then they will also cause a huge amount of hurt on overwatch aswell because they will of course be T’au Sept. But I won’t be going over why their T’au Sept because I have covered that in a previous article so read that you little buggers!

Broadsides – Ok, so this in my opinion is now the best point for point Dakka unit in the entire force. With 8 shots at Strength 7, AP -1, Damage D3 alongside 8 SMS shots these big boys right here were worth the 140 points they costed before Chapter Approved. Now that they have dropped down by a massive 25 points and only cost 115 points I reckon they are worth their weight in gold. I don’t know if they are as good as I am thinking which is why I will be putting them on the table over the next few weeks and I will cover my progress as I go in my Monday Night Mash-Up videos. Also I think against Eldar these guys can be a very good answer to units like Shining Spears. The SMS can deal with hidden units such as Dark Reapers, obviously they will need some Shield Drone support and also the Counterfire Defense System will come in massively handy when playing against Shining Spears. So imagine the Shining Spears declare a charge and a unit of 3 Broadsides unleashes 24 shots hitting on 5’s with re-rolls to hit with their High Yield Missile Pods, followed by 24 SMS shots. Averagely this should kill 4-6 Shining Spears which is AMAZING!!

So that’s what I will be looking at trying post Chapter Approved with my own T’au list but here are a few thoughts on other units which are interesting….

Farsight – If you’re not going for T’au Sept with your army I would say Farsight is an auto-include for you because most T’au armies are fairly static and not very mobile at all. So having this character who can call 2 Mont’kas per game allowing your entire army to advance and still fire as if they had remained stationary for 2 entire turns is the next go to for me. He has also come down in Chapter Approved and is no slacker in combat either!

Commanders with Cyclic Ion Blasters/Missile Pods – The only reason these guys are down here and not in the list of things I want to try for my own army is because I have already tried these bad boys out and they are amazing. I will still be running 1 or 2 in my army because they just add an immense threat which is also something huge for your opponent to think about at all times. Im talking about the Cyclic Ion Blasters ones. However with the really good points drop in Chapter Approved a Commander with 4 Missile Pods is now 36 points cheaper than before which means it may now be worth putting a few of them in your army to add even more long range fire support hidden behind your screens.

Fire Warriors – Need I say more! You all know how much I love these guys, I think now that Broadsides are cheaper aswell as Crisis Suits it means we will be seeing a lot more of those because a lot of players haven’t been able to use those units in a long time with any sort of competitive effectiveness. However I still think that the Fire Warrior spam is a very powerful army and still one of the more competitive builds for a T’au army.

So there you have it guys, my thoughts on T’au alongside what I’ll be trying out.

I will be writing another article about my Imperial soup and how I will be improving/testing that out aswell.

Thank you my lovely readers, I love you all.