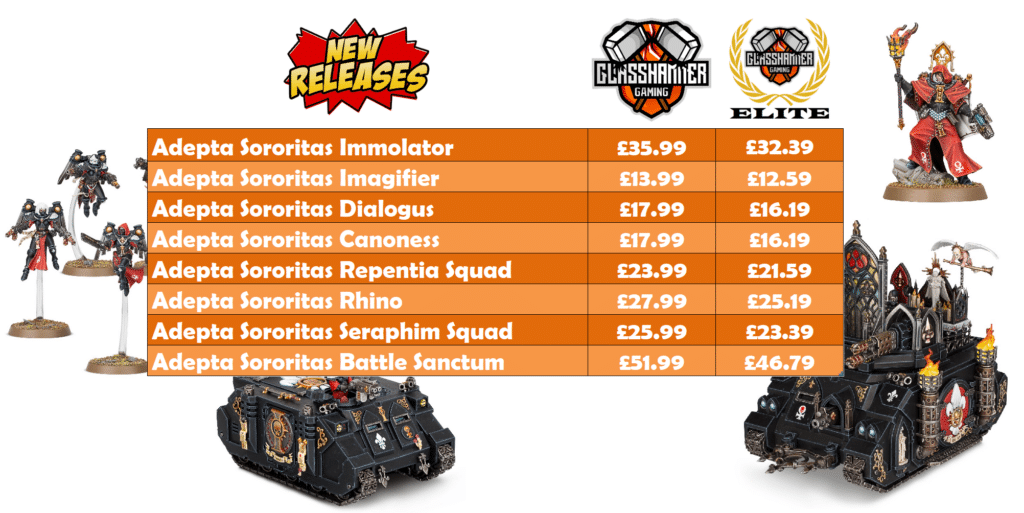 Prepare yourself for a massive final wave of releases for the Adepta Sororitas, including two more tanks, a scenery kit, more unit types, and loads of characters.

Battletome: Seraphon is an essential guide for fans of these star-faring lizards. This book finally settles the debate: are they funky space ghosts or even funkier reptilian people? The background explores the differences between various groups of Seraphon and gives hobbyists ideas for a range of colour schemes.

You’ll also find loads of new rules, opening up new tactical and army-building options. You’ve waited long for an update, and your patience will soon be rewarded – pre-order this 104-page book from this Saturday in standard hardback and digital editions.

Both the Seraphim and the new unit, Zephyrim, are fast-moving units that fill harassment, fire support, and melee roles – and this dual-build box gives you the choice to build either of them.

The aptly named Immolator battle tank bears cleansing flame in the form of a massive immolation flamer. A veritable shrine to the wrath of the God-Emperor, Immolators are designed to strike righteous fear into heretics, witches, and xenos alike.

The Rhino APC is a mainstay of Imperial military organizations, and the Adepta Sororitas are no exception. While similar to the rest, the Sisters of Battle add religious icons, the symbols of their orders, and other unique embellishments.

The martial and spiritual leaders of the Adepta Sororitas, each Canoness is a shining example of purity and dedication.

Bearing a massive statue into battle and preaching the virtues of martyrdom, Imagifiers stoke the fires of faith in nearby sisters.

Chanting sermons and leading hymns , the Sister Dialogus drowns out the bellowed cries of the enemy and exhorts her sisters to fight all the harder.

This scenery kit takes the existing Sector Imperialis terrain and turns it up to 11. Not only do you get an 8” statue depicting Saint Celestine, you also get enough extra walls and details to create a 12” tall octagonal shrine, or what’s left of it…