Initially designed as a four-wheel drive armoured car for the British Army by talented Hungarian engineer Mikos Straussler (also the inventor of the flotation screens used on tanks during the D-Day landings) the Csaba was instead adopted by the Hungarian military.

The Csaba’s light armour was proof against small and light arms fire but was susceptible to heavier firepower. The Csaba was designed for reconnaissance so speed was more useful than heavy armour which reduce its top speed of 40 mph. The 39M was suitably lightly armed with a 20mm Solothurn autocannon and a co-axial machine gun mounted in it’s turret.

A number were converted to the 40M Csaba command vehicle with its main gun being replaced by a R-4T longe-range radio aerial.

Named after Attila the Hun’s son, the Csaba first saw action during the German invasion of the Soviet Union, Operation Barbarossa in 1941, the Csaba would see action through the rest of the war, primarily on the Eastern Front and in defence of the Hungarian homeland. 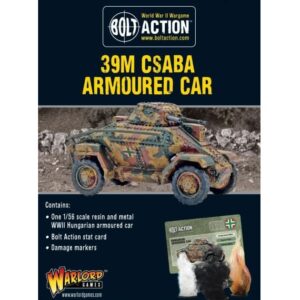