While the majority of the Separatist Alliance’s battle droids are programmed to mindlessly wade into battle, that isn’t always the case.

Equipped with superior programming and built to operate independently, they often operate in lethal pairs that can wreak havoc on the battlefield.

Whether you use them to target key enemy personnel or plant deadly dioxis mines, the BX-series droid commando miniatures you find in this expansion are highly customisable.

Several weapons options—including blasters, vibroswords, and a dioxis charge—as well as deflector shields give you the freedom to build the unit of commando droids you’ve always wanted while eight upgrade cards invite you to outfit them for your particular strategy. 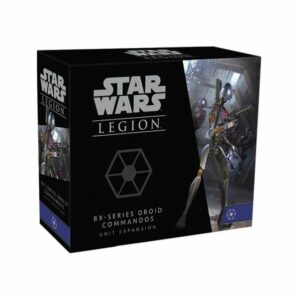