This armoured cruiser was very popular due to its balance of speed, heavy armour and firepower. Armed with a potent 75mm gun and two heavy Besa machine guns, it carried as much weaponry as the more numerous Sherman tank, but survived longer as it was quick enough to be able to outflank larger enemy vehicles then take them head on. It performed well over all terrain and was was more than a match for the venerable Panzer IV, but struggled against larger German tanks so a Sherman Firefly, with a 17 pounder cannon escourted them to keep larger prey from taking an interest. They were used by many armoured divisions throughtout Normandy, including the winter fighting in “The Bulge”.

This fantastic armoured vehicle would be a great addition to any collection, allowing you to use it in your own Bolt Action games to bring an extra punch with your tank units when playing as British forces.

This highly detailed plasticl kit provides all the parts you need to make your own Cromwell Cruiser Tank and is supplied unpainted and assembly will be required. 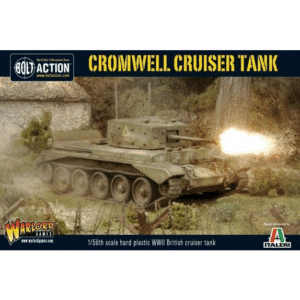