What do you do when you are told to upgrade an already giant metal monster that took a whole new generation of tank to actually deal with? You make it bigger and make it louder. The IS-2 is that very same beast, made as a competent replacement for the KV series and it was a far better designed machine than its predecessor.

It had thick frontal armour and a huge 122mm gun, despite its size; the weight is comparable to that of the German Panther. The IS-2 was intended as a breakthrough tank so it was given a weapon suitable for such a task; and it broke through gloriously, right through the German lines and into the heart of Germany itself.

Please Note: Miniatures are supplied unpainted and some assembly will be required. 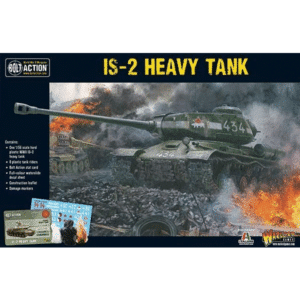