The Type 95 Ha-Go light tank was most numerous armoured fighting vehicle fielded by the Japanese during WWII. It also saw action versus the Soviet Union at Khalkhyn Gol in 1939 and during the Sino-Japanese war of 1937-45. It saw action in both Imperial Army and Special Naval Landing Force forces.

Designed as an infantry support tank to replace the slow Type 89 Yi-Go tank, the Ha-Go was capable to 28mph on road. Armed with 37mm main gun and two machine guns (one in the rear of the turret) the Ha-Go performed well during early stages of the war but increasingly struggled as it faced more powerful and better-armed Allied armour.

So numerous was the Ha-Go that is formed the basis of several conversions employed by the Imperial Japanese – from the Ka-Mi amphibious tank to the Ke-Nu utilising the Type 97 Chi-Ha turret. 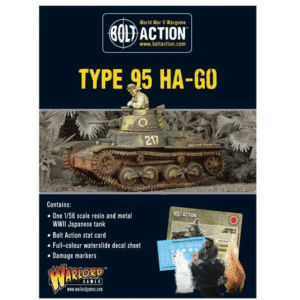