The German Navy had the peculiar battle honour of being involved in the first action of WW2 and also its last. Equipped with Wehrmacht weaponry and wearing their trademark blue uniforms and steel helmet, the navy Infantry units flew into the maelstrom of Berlin, landing in parks or on lakes using seaplanes or any other available transport aircraft. They formed at least three divisions and some regular army officers were placed in the units to give them the value of their experience. They thought in Poland, Narvik, Russia, Arnhem and many of the other ports Germany were shut off from. After the Welsh 52rd Division fought regularly in Holland with them, they were given the nickname “Blue Devils” as they were full of fight.

Please Note: These models are supplied unpainted and some assembly may be required 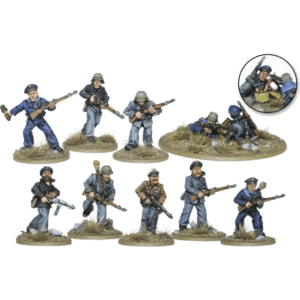