The KV-series tanks were a fearsome and formidable weapon during most of the Second World War. At the onset of the German invasion of the Soviet Union, around 500 KV-1 heavy tanks were built. Outclassing every other tank in operational service, it came as something of a rude awakening for the rampant German Panzer divisions.

The KV-1 had serious advantages over its German counterparts – foremost amongst these was its armour being impenetrable by any tank-mounted weapon at the time unless fired at point-blank range. It had good firepower with a 76.2mm main gun in addition to hull – and turret-mounted machine guns.

The KV-2 outweighed most other tanks of the era especially armed with its 152mm howitzer, making it twice as heavy as the heaviest contemporary German tank. Due to the size of its heavy turret and gun, the KV-2 was slower and had a much higher profile than the KV-1.

This box has the components to allow you to make either a platoon of KV-1s or KV-2s, you can even mix and match! 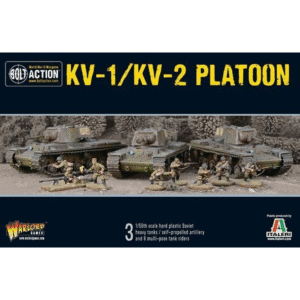