Last Levy The Defence of Berlin

Last Levy the Defence of Berlin

In the shadows of the Reichstag, Berlin’s defenders assembled to defend their besieged capital city. Many desperate civilians were drafted into the Volksturm, a German version of Britain’s Home Guard. Armed with any weapons they could lay their hands on, they were expected to hold back the implacable Red Army determined to punish Germany for the horrors of occupation of the Soviet Union. Old men, wounded soldiers, callow boys drafted in from the Hitler Youth and even some determined women fought side-by-side to attempt to stave off the inevitable, dreadful spectre of defeat.

This last line of defence could still exact a high price for Berlin as they fought the Russian tanks in the streets with panzerfausts and improvised explosives, determined to make the Soviets pay for every inch of their beloved Fatherland.

4 Soliders with Kar98K rifles and Panzerfausts 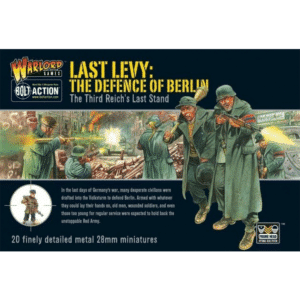 You're viewing: Last Levy The Defence of Berlin £23.99
Add to basket