Based on the proven and numerous M4 Sherman chassis, the M10 was fielded in large numbers during WWII. Although it would be replaced by other tank destroyers based on the same design the M10 continued to serve to the war’s end with distinction, serving with US, British, Polish, Free French and Soviet armies.

Nicknamed the Wolverine by British forces, the Americans referred to it as the M10 tank destroyer, or TD, for short. Despite the relatively slow traverse of the turret, the M10 was a feared weapon on the battlefield as many German panzer commanders could attest!

This kit includes both US and British crews allowing you to field this ubiquitous tank destroyer for either nation. This is the US Army version of the M10. As the Free French wore US uniforms it would only take the addition of French markings to add this to a force attempting to liberate their homeland! Full colour waterslide decal sheets are also included for both US and British forces.

Please Note: Miniatures are supplied unpainted and some assembly may be required. 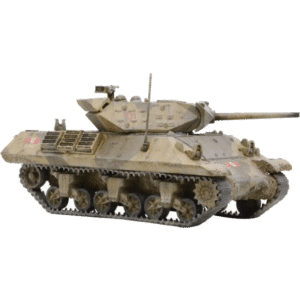