Before the war much effort went into building light tanks, which were felt to have a role analogous to cavalry in an earlier age. Once war began these precepts were quickly brought into question, and the need for more heavily armoured and better armed tanks became apparent. The M3 was derived from the pre-war M2A4 light tank: it retained that tank’s 37mm gun and 3 hull-mounted machine guns.

The British Army was the first to use the “Stuart” in combat. About 170 Stuarts took part in Operation Crusader proving superior or comparable to most of the tanks used by the Axis forces.

The high losses suffered by Stuart-equipped units during the operation had more to do with the better tactics and training of the Afrika Korps than the apparent superiority of German armoured fighting vehicles used in the North African campaign.

Crews liked its relatively high speed, smooth ride and mechanical reliability, hence the name “Honey” was occasionally used by crews as it drove “Sweet like Honey”.

During 1942, the British started keeping Stuarts out of tank-to-tank combat, using them primarily for reconnaissance.

After initial successes in Tunisia the US army took a beating at Kasserine Pass by the tactically superior German DAK and the infamous 88mm guns, (some M3s were put back in use against the Americans). Soon after the US army would disband the light tank battalions, adding them as recce to their medium tank battalions.

Many upgrades were developed such as man packed flame throwers, or with the turret removed, as a “Stuart Recce”. Some others were converted to armoured personnel carriers known as the “Stuart Kangaroo”, and some were converted command vehicles.

The M3A1 made its combat debut on Guadalcanal, where it was part the 1st Marine Tank Battalion in 1941  where it proved an excellent tank in jungles against the ill equipped Japanese, serving with both the US and British forces until gradual replacement by the Sherman from 1944.

This platoon comprises x3 plastic M3 Light tanks with options to use:

Please note: Miniatures come unpainted and some assembly may be required. 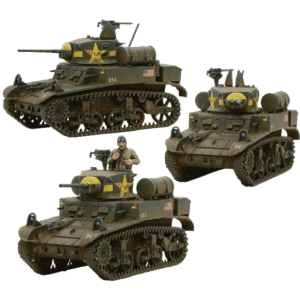