From the early stages of World War II the German army began to equip their Panzergrenadiers with armoured half-tracks that would support their panzers in action.

One of the most useful variants was the 8cm Granatwerfer, a version carrying the standard infantry mortar. The mortar could be moved round the battlefield quickly and in reasonable safety, its armour shrugging off most infantry weapons and shrapnel.

Please Note: Miniatures supplied unpainted and some assembly will be required. 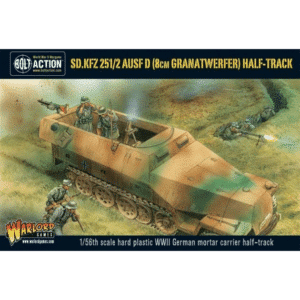