The stoic Russian Infantry who fought on the Eastern Front were formed of seemingly endless waves of conscripted troops. Driven forward by the relentless Commissars, the Red Army managed to break the German forces, and turn the tide of the war in the East.

This Boxed Set contains 40 multi-pose plastic infantrymen, complete with a command team and support weapons – providing you with a solid starter force with which to begin recreating the iconic battles of World War Two on the tabletop.

This Boxed Set contains 40 plastic miniatures. These models are supplied unpainted, and assembly may also be required. 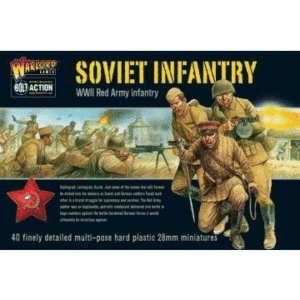