Ancient pacts sworn between the Adeptus Mechanicus and the Adeptus Astartes allow the Space Marines to send those warriors with an affinity for technology to Mars to train and begin the long, arduous journey of becoming a priest of the Machine God. Without the passing on of such ancient lore, the Space Marines would be unable to make war. Techmarines often join their Battle Brothers to repair vehicles on the battlefield so they can continue to provide support during battles. A full servo-harness makes them more effective in combat and improves their ability to make repairs.

Space Marine tanks are heavily armoured fighting machines, but every now and again they will get hit by a weapon powerful enough to put their guns out of action or immobilise their tracks. It’s at these times that a Techmarine comes in handy. While their servo-arm holds the damaged components in place, the Techmarine will set to work repairing it as quickly as possible. And, should the Techmarine get stuck in combat, then the servo-arm is pretty useful there too. If it can hold up a tank, think what it’ll do to an enemy’s face!

This pack contains one Space Marine Techmarine – a finely detailed resin cast kit that comes in nine components, and is supplied with a 25mm round base. This miniature is supplied unpainted and requires assembly – we recommend using Citadel Super Glue and Citadel Paints 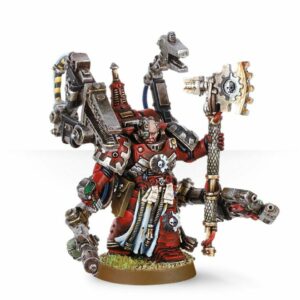