The Second World War saw many confusing contradictions as politics and ideals clashed in epic campaigns that were once thought inconceivable. One such oddity was the Charlemagne division, the 33. SS-Grenadier Division which fought ferociously for the German cause on the Russian front. They were unusual because they were French citizens who volunteered to join the Legion of French Volunteers against Bolshevism, later to be renamed the Charlemagne Division.

At full strength it consisted of over 11,000 men, all who decided to join the Nazi cause and crush Communism. They fought very well in many battles in Russia and Poland, often against appalling odds and, remarkably, actually broke into Berlin to defend their Führer with 350 remaining men (Unterscharführer Eugene Vaulot destroyed eight Soviet tanks with panzerfausts, earning a Knight’s Cross)!

The men of the Charlemagne Division, marked by their tricolor shoulder badge, were destroyed in Berlin and many met a grim end at the hands of vengeful Free French forces; an understandable but sad end to an elite fighting unit.

Also supplied are interchangeable heads for these miniatures giving a variety of headgear and posing. 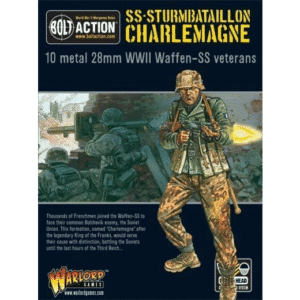