32 push-fit miniatures, which can be assembled without glue and are even supplied on pre-coloured plastic:

– A Knight-Incantor – a glorious and powerful wizardly leader carrying an incantor’s staff along with a voidstorm scroll
– 2 Evocators – shock-troops who blaze with celestial lightning, armed with tempest blades and stormstaves;
– 3 Castigators – support troops who lay down withering ranged attacks with their thunderhead greatbows;
– 5 Sequitors – frontline infantry who bring the fight to the fore with stormsmite mauls and soulshields;
– A Celestar Ballista – an enormous heavy bolt thrower, serviced by 2 Sacristan Engineers who defend their war machine with sigmarite blades.

– A Lord-Executioner – a horrifying gheist whose image is dominated by the macabre gallows lashed to his back, he carries a decapitating greataxe;
– 4 Grimghast Reapers – cursed, indiscriminate killers armed with double-handed slasher scythes – their leader, the Extoller of Shyish, carries a great bell known as the death knell;
– 5 Glaivewraith Stalkers: unstoppable gheists drifting inexorably towards their prey, each attacks with a 2-handed hunter’s glaive;
– A 10-strong Chainrasp Horde: each armed with a malignant weapon – axes, swords, and flails feature heavily here – this frightening force is led by a Dreadwarden, who wields a 3-pronged candelabra.

Tempest of Souls features a 16-page set booklet of core rules, providing the basics you need to get gaming. It includes:

Of course, you’ll need guidance in order to play games with your new miniatures – included is a 96-page softback book, packed with background and essential information on painting and playing, including:

Also included are a double-sided playing mat used to fight your battles upon (with the inside of the box even doubling as a scenery piece!), 6 6-sided dice and a 12″ range ruler. 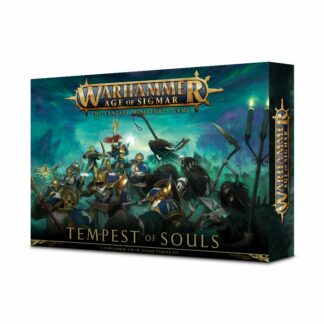