Treebeard is a natural leader of the Fangorn army list, both in terms of the narrative of Middle-earth and his near-unstoppable power on the battlefield. He can bear Merry and Pippin to battle, as he did while leading the Last March of the Ents, and the kit includes the option to include both Hobbits atop his shoulder branches. Merry and Pippin also feature in the set as models on foot in their own right – in fact, they’re a little taller than normal, as they’ve recently imbibed Ent-draught, which has given them an enchanted growth spurt!

This kit comprises 63 plastic components with which you can assemble 1x Treebeard (who can be assembled with or without ‘mounted’ versions of Merry and Pippin), 1x Meriadoc Brandybuck on foot, and 1x Peregrin Took on foot. It comes supplied with 1x Citadel 60mm Round Base and 2x Citadel 25mm Round Bases. 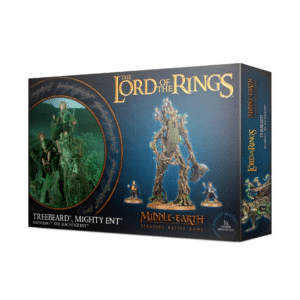