Commander Dante is one of the most legendary Space Marine Commanders in the Imperium. He has led the Blood Angels Chapter for over 1,000 years and it is widely believed that he is the oldest living Space Marine. No-one within the Imperium has fought in as many war zones as Dante and few can match him for the number of foes he has killed. Amongst Space Marines, Dante is regarded as a paragon of the Space Marine’s cause to defend humanity. Amongst mortal men he is nothing less than a saviour, a golden god who descends from the heavens on wings of fire to smite his foes in deadly close combat.

This pack contains Commander Dante – a finely detailed resin cast kit that comes in three components and is supplied with a 25mm round base. This miniature is supplied unpainted and requires assembly – we recommend using Citadel Super Glue and Citadel Paints. 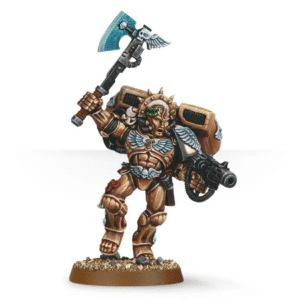