When a mere dreadnought just isn’t stompy enough, a Mek feels the urge to build a stompa. As big as a Battle Fortress, a Stompa is a walking, shooting, roaring idol of Gork. It has a crew of several Orks aided by dozens of Grot riggers, runners and assistants. A Stompa usually mounts two or three enormous guns as well as some form of oversized claw or whirring blade for chewing up enemy tanks and titans in close combat.

This box set contains one large multi-part plastic Ork Stompa. This massive kit has over 230 components, comes with a myriad of weapon, and can be modelled in a number of different ways. 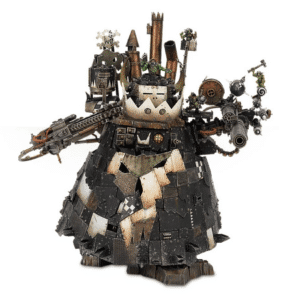